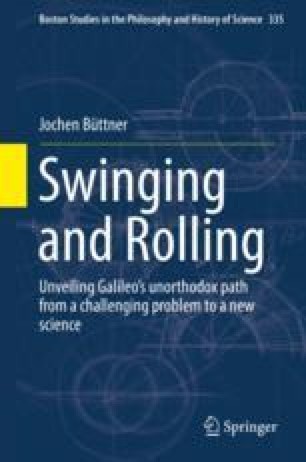 Conclusion: The Emergence and Early Evolution of Galileo’s New Science of Motion

The chapter summarizes the clear-cut, firmly source-based account of how Galileo’s new science of naturally accelerated motion emerged. In 1602, a challenging similarity Galileo perceived between what he held to be true concerning pendulum motion on the one hand and accelerated motion on inclined planes on the other hand, resulted in an intense phase of work in which he inquired deeply into the relation of swinging and rolling. Galileo did not achieve his goal. Yet in the course of this work a host of novel insights concerning the pheno-kinematics of naturally accelerated motion along inclined planes was obtained, from what were initially only a few isolated assumptions. The new propositions thus established would indeed constitute a major part of the subject matter of the new science as it was published some 35 years later. Galileo immediately set out to turn his results into a publishable science able to meet the standards of the time. However, his attempt to found the new science on arguments starting from dynamical assumptions failed. In 1604 Galileo started an afresh attack on the problem of the foundation, availing himself of a new approach which perceived naturally accelerated motion as essentially characterized by the change of the degrees of velocity. It was this new approach which, after some aberrations, led Galileo to the foundation of the new science he finally presented in the Discorsi. This interpretation overthrows the standard chronology that has asserted itself in the literature, and has an important bearing on our understanding of the emergence and the further development and fate of Galileo’s new science.