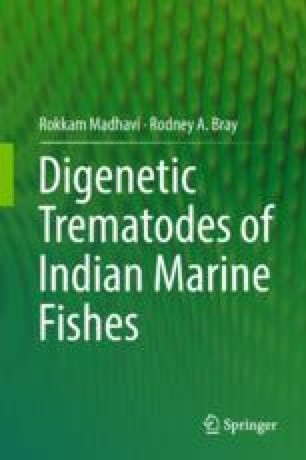 Bucephalidae is a large family of digenean parasites occurring in the gut of marine, brackish and freshwater piscivorous fishes. Members of this family are easily recognised by the following combination of characters: the position of the mouth at midbody on the ventral surface, the presence of an anterior rhynchus, the absence of a ventral sucker, the position of the genital pore near the posterior extremity of the body and the presence of a genital lobe within the genital atrium. The structure of the rhynchus is of considerable importance in the separation of various bucephalid genera. The exact systematic placement of Bucephalidae within the Digenea has been much debated and the higher classification proposed by Olson et al. (2003) placing it in the order Plagiorchiida LaRue, 1957, and suborder Bucephalata Olson, Cribb, Tkach, Bray & Littlewood, 2003, is followed here.