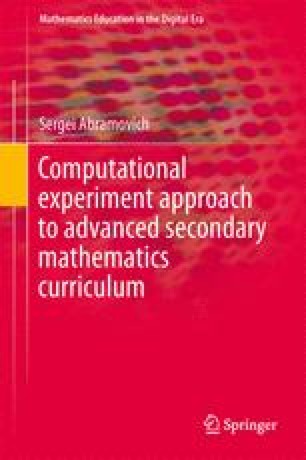 This chapter provides theoretical underpinning of computational experiment approach to pre-college mathematics curriculum. It reviews mathematics education research publications and (available in English) educational reform documents from Australia, Canada, England, Japan, Singapore and the United States related to the use of computers as tools for experimenting with mathematical ideas. The chapter links pioneering ideas by Euler about experimentation with mathematical ideas to the use of the word experiment in the modern context of pre-college mathematics curricula. It emphasizes the role of mathematics education reform in bringing computers first to the undergraduate level and gradually extending their use to include experimentation at the primary level. Several theoretical frameworks including signature pedagogy, Type I/Type II technology applications, parallel structures of teaching and learning, agent-consumer-amplifier framework, and collateral learning in the digital era are highlighted leading to the development of the notion of technology-enabled mathematics pedagogy (TEMP). One of the major characteristics of TEMP is its focus on the idea with ancient roots—the unity of computational experiment and formal mathematical demonstration. The relationship between technology-enabled experiment and solution-enabled experiment is introduced as a structure that makes computational experiment a meaning making process. It will be demonstrated how visual imagery can support deductive reasoning leading to an error-free computational experiment.