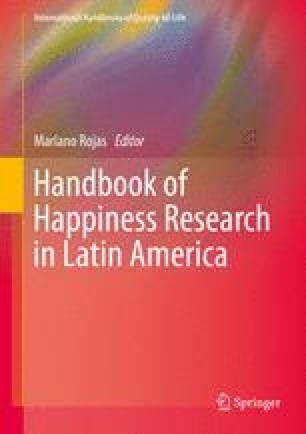 Happiness Inequality in Latin America and the Caribbean

In this appendix we provide a simple explanation for non-economists of what is the relative risk aversion measure used in this paper to calibrate utility levels.

Under the assumption of decreasing marginal returns to income the utility function is concave in income. Assume that an individual is offered the opportunity to invest in a project that will pay $12 with probability 0.5 but that may end up losing $4 with probability 0.5. If he is risk neutral he will be indifferent between this project and another one that will pay him $4 with certainty since 0.5*12 − 0.5*4 = 4. If he strictly prefers the certain project we say that he is risk averse.

Figure 23.1 presents a concave utility function and shows how the certain option is strictly preferred over the lottery for a risk neutral individual of wealth level $80. If he buys the lottery with probability 0.5 he ends up with a wealth level of $76 = $80 − $4 and with probability 0.5 he ends up with wealth $92 = $80 + $12. If he invest in the certain project he ends up with a wealth level of $84 = $80 + $4. The expected utility of investing in the risky project is therefore \( 0.5u\left(80-4\right) + 0.5u\left(80 + 12\right)=0.5u(76)+0.5u(92) \) lower than the utility level of investing in the certain project u(84).
It is clear from the graph that for all concave functions the certain project will be strictly preferred, i.e. concavity of the utility function implies risk aversion. Intuitively it seems to be that the more concave a utility function is the more risk averse an individual is. The second derivative of the utility function is therefore a natural candidate for measuring risk aversion. The problem is that it is not constant to transformations of the utility function. For instance, if we multiply the utility function by a constant, the preferences of the individual do not change but the second derivative gets multiplied by this constant. In order to have a measure of risk aversion that is invariant to affine transformation of the utility function the second derivative can be normalized dividing by the first derivative. This is the so called Arrow-Pratt measure of absolute risk aversion.
$$ {r}_A=-\frac{u^{\mathit{{\prime\prime}}}(y)}{u^{\mathit{\prime}}(y)} $$
(23.5)
The Arrow-Pratt measure of absolute risk aversion is useful when the projects evaluated are additions or subtractions over the wealth level of individuals. Many times projects imply proportions, like the return on investments that are usually stated relative to the investment level. Suppose an individual is offered an investment that with probability 0.5 will imply a return of 15 % but with probability 0.5 will imply a return of −5 %. The expected rate of return is 5 %. With an initial wealth of $80 with probability 0.5 he will end up with wealth $92 (80*1.15) and with probability 0.5 will end up with wealth level $76 (80*.95). Investing in a project with a certain payment of 5 % will end up with wealth level $84 (80*1.05).
The expected utility of the risk project is:
$$ 0.5\mathrm{u}\left(80*.95\right)+0.5\mathrm{u}\left(80*1.15\right)=0.5\mathrm{u}(76)+0.5\mathrm{u}(92) $$
(23.2)
and the expected utility of the certain project is u(84). Note that the final wealth levels of this example are the same as the previous one. The only difference is that in this example the projects pay a rate of return relative to initial wealth.
Extending previous reasoning risk neutrality implies indifference between a risky project and the certain project of 5 % return. A risk adverse individual will strictly prefer the certain project over the risky one. Once again concavity plays a key role but since the payments of the lottery are proportions of the initial wealth (or investment) the measure of risk aversion should take this into account. The relevant concept is the Arrow-Pratt coefficient of relative risk aversion that is defined as:
$$ {r}_A=-y\frac{u^{\mathit{{\prime\prime}}}(y)}{u^{\mathit{\prime}}(y)} $$
(23.6)
The literature on risk has theoretically and empirically addressed the issue of how risk aversion changes with wealth levels. It is reasonable to think that as people become wealthier it is less problematic for them to take chances on lotteries implying fixed sums. In the first examples if wealth changes from 80 to 800 the outcomes of the lottery represent a much small proportion of total income and therefore affect less the life of the individual. It is likely that the individual might be able to “afford” to get involved in riskier projects. Therefore decreasing absolute risk aversion is in general assumed. Empirical research has presented wide support for this. When the lotteries imply proportions of an individual wealth it is not clear what might happen. In the second example the change in the wealth does not alter the proportions, the positive outcome is always 15 % of wealth and the negative outcome is also −5 %. Empirical research has not been able to establish a definitive answer. Friend and Blume (1975) obtained mixed results indicative of either increasing relative risk aversion or constant relative risk aversion. Cohn et al. (1975) found decreasing relative risk aversion. Morin and Fernandez (1983) found that attitude towards risk varies among social groups: poorer individuals exhibiting increasing relative risk aversion while richer individuals exhibiting decreasing relative risk aversion. The latest published paper on this issue that we are aware off is Chiappori and Paiella (2011) that report evidence of constant relative risk aversion. This is the assumption used in this note.