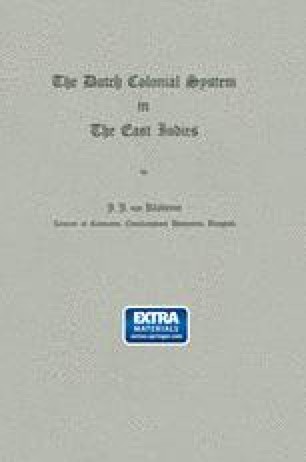 Since 1890 the N.I. government had been on watch to protect the native interests where they were threatened by the entrepreneurs. This attitude was still more or less passive and repressive. Active guidance in the development of the country’s resources was not actually given. We have seen something of it in the encouragement of native tea growing. A definite intentional and planned intervention was begun only after the depression of 1929.

Active Guidance Native Interest Colonial System Dutch Colonial Japanese Import
These keywords were added by machine and not by the authors. This process is experimental and the keywords may be updated as the learning algorithm improves.
This is a preview of subscription content, log in to check access.

Cite this chapter as:
Klaberen J. (1983) The Government’S Economic Welfare Policy. In: The Dutch Colonial System in the East Indies. Springer, Dordrecht