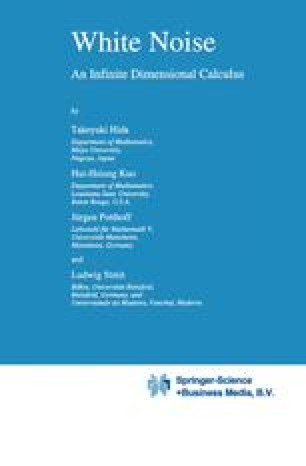 Chapter
Part of the Mathematics and Its Applications book series (MAIA, volume 253)

In the early to mid-seventies Hitsuda (1972), King (1975) and Skorokhod (1975) have formulated new approaches to construct and extend Itô’s stochastic integral with respect to the paths of Brownian motion (for excellent accounts on the “traditional” approach we refer for example to McKean (1969), and Ikeda and Watanabe (1981)). The methods of these new approaches were based on the Wiener-Itô decomposition, and on the use of a “creation operator”. In the early eighties it was observed independently by Gaveau and Trauber (1982), and Kubo and Takenaka (1981) that this “creation operator” is given by ∂ t * — i.e., the adjoint of the gradient ∇ (cf. Chapter 5). Actually, ∫ 0 T dt at ∂ t * is a divergence operator in the sense of Krée and Krée (1983) (cf. also Shigekawa (1980) and Sugita (1985a)). This observation became the basis of a mathematical investigation of this formulation of Itô’s integral. It has been exploited in a large numbers of recent publications, especially for the stochastic analysis of anticipating processes. Without aiming at a complete list of references, we want to mention here the following articles: Asch and Potthoff (1991), Buckdahn (1989), Kuo and Russek (1988), Nualart and Pardoux (1988), Nualart and Zakai (1986), Ocone (1984), Ustunel (1986).

Brownian Motion Product Rule Creation Operator Stochastic Integration Left Derivative
These keywords were added by machine and not by the authors. This process is experimental and the keywords may be updated as the learning algorithm improves.
This is a preview of subscription content, log in to check access.