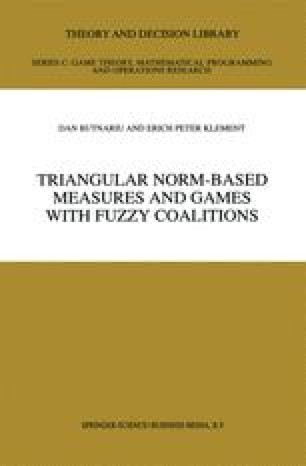 The class of cooperative games, which is the main topic of this book and which we shall investigate in detail in chapters IV — VI, consists of games with fuzzy coalitions. In such coalitions players are allowed to belong in a gradual way (as opposed to the yes/no alternative in classical models of games in characteristic function form, as described by Neumann & Morgenstein [1944]). Fuzzy coalitions will be described by fuzzy sets [Zadeh 1965], a generalization of Cantorian sets. For a Cantorian set A the possible truth values of the statement “x is an element of A” are 0 and 1 (False and True), whereas for a fuzzy set A the truth values of the statement “x is an element of A” can be any number in the interval [0, 1]. We shall describe fuzzy sets in more detail in the next section; here we want to provide the tools for extending operations such as intersection and union of sets. This enables us to represent algebraically natural entropic rules for forming and dismantling fuzzy coalitions.