To Know or Not to Know 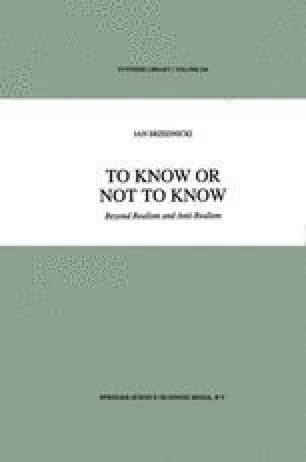 Conclusion: A Picture of the Theory

The present attempt seeks in a very modest way to present a model that would avoid the perceived faults of what is hitherto on offer, and to provide a basis for a sounder theory. It is not merely the case that previous work has not gone far enough, but also that it was wrongheaded. Assumptions were made that should not have been made, and these precluded the success of the venture from the start. More, and more work was done on the consequences of these assumptions. Deeper, and deeper, questions were asked, but the offending main assumption was left untroubled. That permitted it to subvert all efforts. Not, I haste to say to the point that no good results emerged, clearly many did, and splendidly. But it fails in so far as the main objective of the work remained beyond reach.

Ontological Commitment Normative Constraint Infinite Regress Epistemic Theory Subjective Side
These keywords were added by machine and not by the authors. This process is experimental and the keywords may be updated as the learning algorithm improves.
This is a preview of subscription content, log in to check access.