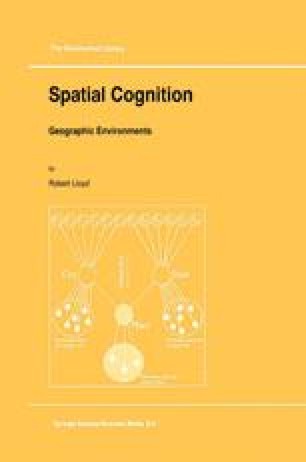 The purpose of this chapter is to explore how experiences with maps are translated into knowledge. The discussion will center on the hypothesis that a person experiencing a sequence of similar objects, e.g., map symbols that represent a category, encodes a cognitive structure in his or her memory. This cognitive structure will be called a prototype. This chapter uses the term prototype as it was defined by Eleanor Rosch’s (1973, p. 328) to mean the “central tendencies of categories.” The terms category, exemplar, and prototype are intended in the sense defined by Rosch. For example, a category of maps would be a distinctive class of maps, e.g., reference maps, azimuthal projections, or sketch maps. An exemplar for these categories would be an individual map that was determined to be an instance of one of the categories. The prototype of a category represents the central tendencies of the characteristics of all the exemplars of a category. Exemplars similar to the prototype are considered as most typical of the category even though it is possible for no individual exemplar to be an exact duplicate of the prototype.

Output Neuron Input Neuron Family Resemblance Positive Connection Pattern Associator
These keywords were added by machine and not by the authors. This process is experimental and the keywords may be updated as the learning algorithm improves.
This is a preview of subscription content, log in to check access.