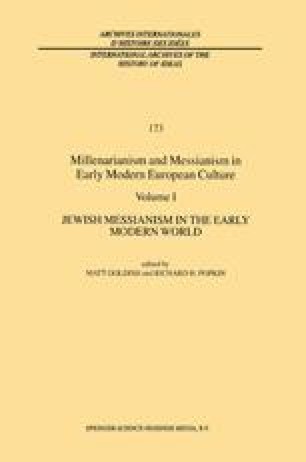 The Messianism of Isaac Abarbanel, ‘Father of the [Jewish] Messianic Movements of the Sixteenth and Seventeenth Centuries’

One can hardly gainsay the accuracy of the recent observation that “though much has been written on [Isaac] Abravanel’s messianic posture, there is no systematic attempt to reconcile its various aspects into a consistent theory.”1 Yet beneath the question of the contours, character, and consistency of Abarbanel’s messianic stance lie what would seem more basic queries — just how deep, abiding, and central to his religious outlook and scholarly occupations were the millennial expectations which Abarbanel expressed in various works written after the 1492 expulsion of Spanish Jewry? What motivated his apparently thoroughgoing investment in Judaism’s “messianic idea” during this period? These are questions which students of Abarbanel and early modern Jewish messianism have by no means overlooked. What they have offered by way of answers amounts to a theme and variations. The theme is that Abarbanel’s preoccupation with the imminence of “the end” was definitive in shaping his religious outlook and scholarly activities throughout his postexpulsion period (i.e., that period during which he composed the overwhelming majority of his writings) and that his messianic consciousness and the vast literary corpus which it spawned mark a direct response to the expulsion of 1492.

Seventeenth Century Jewish People Jewish History Messianic Advent Messianic Calculation
These keywords were added by machine and not by the authors. This process is experimental and the keywords may be updated as the learning algorithm improves.
This is a preview of subscription content, log in to check access.