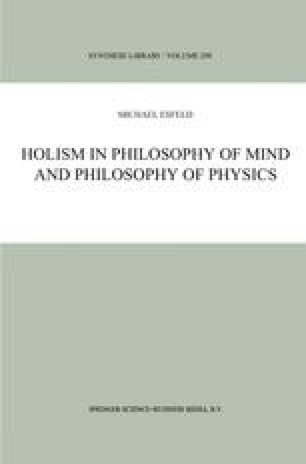 The Meaning of Quantum Holism

If one endorses quantum holism, one is committed to a minimal requirement for an ontological interpretation of quantum theory: a system has those properties at a given time of which its state is an eigenstate. If one accepts this minimal requirement, one has to acknowledge that entanglement extends as far as the whole of matter at the level of quantum systems. Entanglement is distinct from interactions [8.1]. My proposal for a characterization of quantum holism combines the suggestions which exist in the literature and which employ the notions of non-supervenience and non-separability [8.2]: a quantum system has some of the properties which belong to the family of properties that make something a quantum system in the last resort only taken together with all other quantum systems. Consequently, the whole of matter is one holistic system at the quantum level. This proposal can leave open whether or not quantum systems are individuals; the issue of quantum holism thus is distinct from the issue of individuals [8.3]. Finally, I contrast this holism with the holism that can be built upon general relativity and that fits into a Cartesian philosophy of physics [8.4].

Quantum Theory Quantum System Quantum Entanglement Quantum Potential Holistic System
These keywords were added by machine and not by the authors. This process is experimental and the keywords may be updated as the learning algorithm improves.
This is a preview of subscription content, log in to check access.