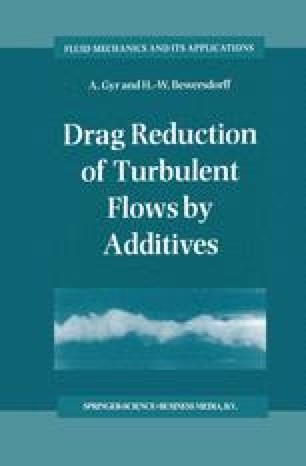 Chapter
Part of the Fluid Mechanics and Its Applications book series (FMIA, volume 32)

When Toms (1949) discovered that minute amounts of added long-chain polymer molecules could reduce the pressure losses in a turbulent pipe flow, this was not the first time that such an effect by additives was observed. It was already known that fibre suspensions, mainly fibres used in the paper making process, showed the same effect in concentrations, however, that were two orders of magnitude higher than in Toms’ experiment (for a review of these earlier papers see Radin et al. 1975). Toms however, showed for the first time that minute amounts, 5–10 ppm per weight, of polymers could have a really dramatic effect. In other words, the drag reducing effect became a promising candidate for partial solutions of the problem of energy saving.

Reynolds Number Velocity Profile Wall Shear Stress Friction Factor Newtonian Fluid
These keywords were added by machine and not by the authors. This process is experimental and the keywords may be updated as the learning algorithm improves.
This is a preview of subscription content, log in to check access.