Development of the Syntax-Discourse Interface 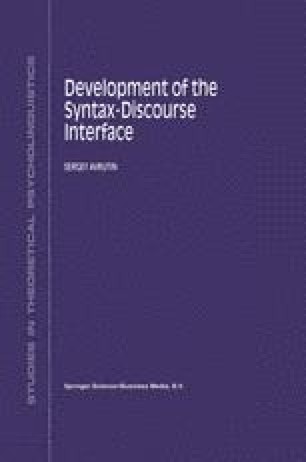 Development of the Syntax-Discourse Interface pp 131-175 | Cite as

In this chapter, I turn to another error observed in the speech of children and Broca’s aphasics, namely the incorrect use of untensed clauses34. It has been reported that children acquiring many languages (crucially, non-pro-drop languages, see discussion below) allow the verb to be untensed (that is, Root Infinitives, such as Michel dormir ‘Michel sleep’ in French, or Mommy go, in English.) I provide syntactic and discourse analyses of these constructions and argue that, similar to the errors discussed in previous chapters, root infinitives can also be explained on the assumption of the limited processing resources, although with a certain modification of this hypothesis.

Embed Clause Tense Operator Chapter VIII Main Clause File Card
These keywords were added by machine and not by the authors. This process is experimental and the keywords may be updated as the learning algorithm improves.
This is a preview of subscription content, log in to check access.