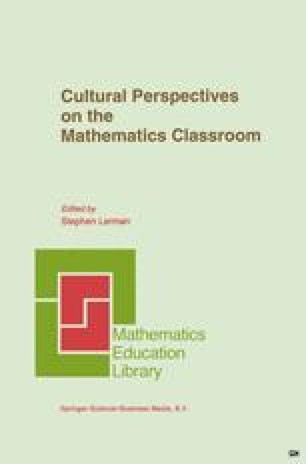 Cultural Perspectives on the Mathematics Classroom pp 1-5 | Cite as

We live in culturally conscious times. It confronts us in diverse forms: debates on late-night British television on ‘high’ culture versus ‘low’ culture, T.S. Eliot versus Bob Dylan; the same-tasting food that can be eaten in the same packaging in the same surroundings from New York to Beijing to Harare; architecture that draws in features which step across time and distance and that reflects the alienation, not in its modernist form of the self from society, but of the self from the self; the fin de siècle search for identity through aggressive assertions of ever more fragmented nationalities; and the increasing market-orientation of schools and universities in Britain and other countries, forced to compete with each other for ‘customers’ who were once called students. Amongst the young, culture manifests itself in the elaborate semiology whereby, for instance, the way that one’s ‘trainers’ are tied, if they are the right ones in the first place, can identify or exclude from the desired group.

Mathematics Learning Mathematics Curriculum Classroom Language White Western Psychological Description
These keywords were added by machine and not by the authors. This process is experimental and the keywords may be updated as the learning algorithm improves.
This is a preview of subscription content, log in to check access.