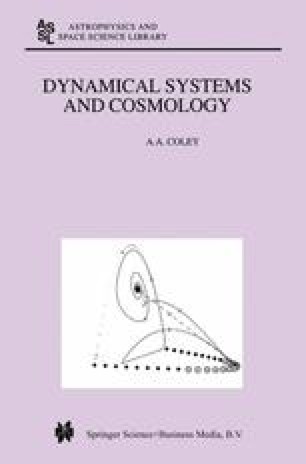 In conventional cosmology in which the universe is expanding, as we extrapolate back in time towards an initial big bang singularity ever higher energies are reached until the classical theory breaks down and a more fundamental theory is necessary. Superstring theory represents the most promising candidate for a unified theory of the fundamental interactions, including gravity [164, 298] . There are known to be five consistent anomaly—free, supersymmetric perturbative string theories in ten dimensions [164], known as the type I, type IIA, type IIB, SO(32) heterotic and E8 × E8 heterotic theories. There is now evidence that these theories are related by a set of dualities and may in fact represent different manifestations of a more fundamental quantum theory, often termed M—theory [376]. Supersymmetry implies that the quantization of the string is only consistent if spacetime is ten—dimensional. On the other hand, M—theory, defined originally in terms of the strongly coupled limit of the type IIA superstring, is an eleven—dimensional theory. It is widely believed that eleven—dimensional supergravity represents the low—energy limit of M—theory [337, 376].

Equilibrium Point Cosmological Constant Phase Portrait Heteroclinic Cycle Dilaton Field
These keywords were added by machine and not by the authors. This process is experimental and the keywords may be updated as the learning algorithm improves.
This is a preview of subscription content, log in to check access.