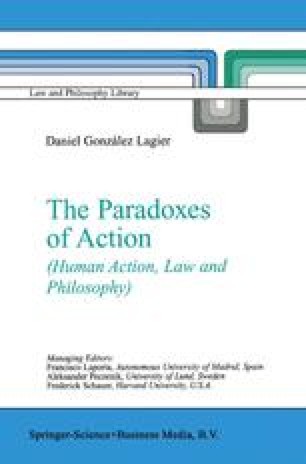 In the preceding pages, I have tried to offer an introduction to the theory of human action and, at the same time, to develop a position regarding some of the difficulties the reconstruction of that concept raises. I began by presenting some apparent contradictions between certain statements about actions which, taken in isolation, all seem intuitively acceptable. I have called the tension between the plausibility of these statements and their mutual inconsistency the ‘paradoxes of action’. And I have suggested a way to dissolve that inconsistency — a way which is very common in analytical philosophy (though other approaches regard it as frustrating): by showing that those statements do not refer to one and the same concept of action, and that the word has different meanings in each of these statements. What are those meanings? It seems to me that the answer can be found if we review three ‘battle lines’ in the discussion about the concept of action (or in discussions where that concept forms part of the background): the analytical philosophy of action in the strict sense, the doctrine of criminal law, and the theory of speech acts. We have seen that the tension between, very roughly, actions understood as bodily movements or — in the case of speech acts — as a basic substrate, actions understood as the intentional meaning of what an agent has done, and actions understood as the social meaning, depending on social rules, of an agent’s conduct is present in all three of them. And if we take into account this ambiguity of the term ‘action’, the inconsistency which gave rise to the paradoxes disappears.

Bodily Movement Analytical Philosophy Legal Theory Social Rule Social Meaning
These keywords were added by machine and not by the authors. This process is experimental and the keywords may be updated as the learning algorithm improves.
Download to read the full chapter text