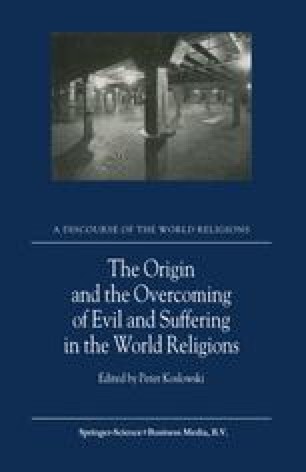 Introduction
Chapter
Part of the A Discourse of the World Religions book series (DOWR, volume 2)

The question of the origin and the overcoming of evil and suffering is one of the fundamental questions of religions. All religions attempt to explain how evil and suffering came into the world and continue to exist. The philosopher Friedrich Schelling wrote cogently in his Philosophy of Revelation at the middle of the nineteenth century that the concepts of the will and of evil and the belief that the world is transformed distinguish religion and philosophical traditions that have originated under the influence of religion from ancient philosophy, which recognizes neither evil nor the will nor the transformations of the world. One could extend this idea and say that the emphasis on the significance of the will and of human deeds for the condition of the world, the attempt to speak about evil and suffering and to “cope” with them, and the view that the world, as it is, is not original, but is instead the consequence of transformations caused by evil, represents the characteristic trait of the religions that most distinguishes them from philosophical traditions.

Human Person Philosophical Tradition Human Race World Religion Ancient Philosophy
These keywords were added by machine and not by the authors. This process is experimental and the keywords may be updated as the learning algorithm improves.
This is a preview of subscription content, log in to check access.