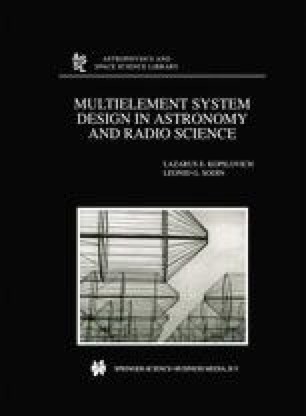 General Reasons and Statement of the Problem

Phased antenna arrays are widely exploited in radio astronomy as well as in other branches of radio science. Their attractiveness lies in the possibility to realize huge apertures up 103λ, and more, and also in the possibility of practically instantaneous non-mechanical pointing the beam in any direction of space. At the present time, the majority of large radio telescopes are employing phased arrays. Such are, for example, the Mills cross, radio telescopes DKR-1000 and UTR-2, and many others. In contrast to the interferometric systems described in Chapters 1 and 2, antenna arrays do not use correlation products. The signals from their elements are summing with some complex factors (weights). Owing to this, in the output a field pattern is formed (rather than a power pattern as in interferometers).