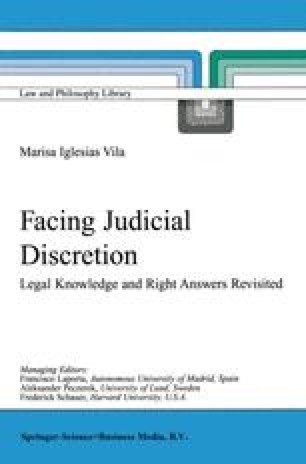 In the previous chapter we presented Dworkin’s theory as an attempt to render the existence of objective restrictions to judgements about the legal practice compatible with the denial of semantic realism. Dworkin’s strategy is based on two ideas: on the one hand, that every legal judgement is theory-dependent and internal to a particular social practice; on the other, that the correctness of legal judgements can and ought to be sought within the theory or interpretive scheme that gives rise to them. But hitherto we have only outlined the negative aspect of Dworkin’s position, and the conclusion intended by the thesis of internal objectivity, namely, that there are genuine restrictions to interpretation. We shall now turn to investigate how Dworkin justifies this conclusion. It was pointed out that the justification of this conclusion requires addressing some issues regarding the problem of knowledge and the truth of legal propositions. We contended that neither empiricist holism nor Davidson’s coherentism warrant objectivity, and therefore none of them overcome scepticism.

Conceptual Scheme Propositional Content Language Game Legal Practice Coherence Theory
These keywords were added by machine and not by the authors. This process is experimental and the keywords may be updated as the learning algorithm improves.
This is a preview of subscription content, log in to check access.