University-Industry R&D Collaboration in the United States, the United Kingdom, and Japan 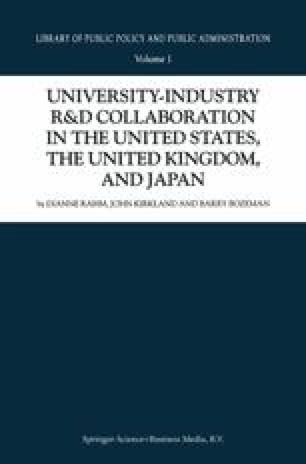 University-Industry R&D Collaboration in the United States, the United Kingdom, and Japan pp 40-58 | Cite as

Finding ways to channel knowledge, know-how, and technology from universities to industry for the benefit of the nation became an important public policy issue for the U.S. beginning in the late 1970s, the beginning of the era of global competition. Concern over declining rates of economic growth and reduced competitiveness of U.S. industry resulted in a policy approach that emphasized improving the linkages between U.S. firms and research universities. The policy goal was to improve the condition of firms, especially in innovation-intense industries, by using university research results and personnel to bring to the market new or improved products, processes, and services. Reacting to financial pressures, universities were receptive to the incentives included in the legislation and adopted a mission of research partnership with industry. Responding first to their declining competitiveness and later to the organizational stress created by corporate restructuring, the private sector also engaged in concerted efforts to link to universities.

Technology Transfer Small Business Innovation Research Business Incubator Advance Technology Program Semiconductor Research Corporation
These keywords were added by machine and not by the authors. This process is experimental and the keywords may be updated as the learning algorithm improves.

This chapter and the next were written by Dianne Rahm and draw heavily on data collected during a two-phase research project conducted during 1993 and 1994 funded by a grant from the U.S. National Science Foundation. In phase I, a study population consisting of slightly less than 2,000 administrators or researchers within the top 100 U.S. research universities was surveyed. Two specially tailored surveys were developed. One emphasized researcher concerns and was sent to research professors affiliated with university centers or with departments of Biology, Chemistry, Computer Science, Electrical Engineering, and Physics. The other stressed university administrative issues and was sent to academic officials within each university. Of those, 1,114 completed surveys were returned yielding an overall response rate of 57%. Responses included 996 researcher surveys and 118 administrative surveys giving response rates of 56% and 63%, respectively. In phase two, site visits to 5 selected universities and firms which partner with them were made. Site visits were completed at The Pennsylvania State University, Georgia Institute of Technology, the University of Wisconsin, Madison, Stanford University, and Washington University. Seventy personal interviews were conducted with university and industry personnel. The author is grateful for the support of the National Science Foundation received under grant # SBR-9305591.