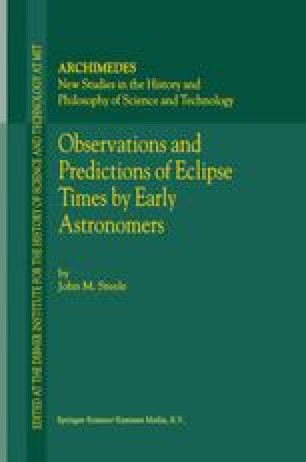 Until the end of the last century the little that was known of Mesopotamian astronomy came from scattered references to the “Chaldaeans,” portrayed as mystical astrologers in the works of Greek authors such as Strabo and Diodorus Siculus and the Old Testament,1 and from the small number of observations contained in Ptolemy’s Almagest which he describes as having been observed in Babylon. However, after the archaeological exploration of Assyria and Babylonia by Austin Henry Layard and others which began in the 1840s, original cuneiform records have come to light that have transformed this image.2 Not only were celestial events used for divination in Mesopotamia, they were also systematically observed and recorded in Babylon from around the middle of the eighth century BC,3 and by the fourth century BC mathematical schemes had been developed that allowed various astronomical phenomena such as the appearance and disappearance of the planets and the time-intervals between successive oppositions and conjunctions of the sun and moon to be calculated.4 Babylonian astronomy was to have a profound and long lasting legacy: Greek, Indian, Islamic, and even Medieval European astronomy all drew on its influence.5

Solar Eclipse Lunar Eclipse Eclipse Observation Astronomical Diary Contact Interval
These keywords were added by machine and not by the authors. This process is experimental and the keywords may be updated as the learning algorithm improves.
This is a preview of subscription content, log in to check access.