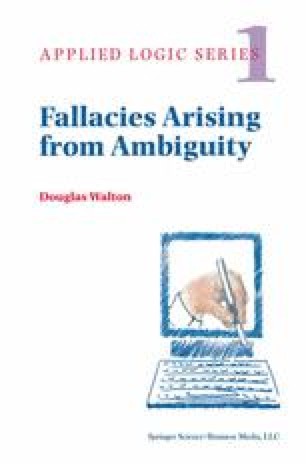 Amphiboly continues to be treated as one of the major informal fallacies by many of the logic textbooks that deal with fallacies, following a longstanding tradition that goes back through the Middle Ages, originating in Aristotle. Aristotle, in his De Sophisticis Elenchis or On Sophistical Refutations (165 b 27)— see Chapter 1—defined amphiboly as the fallacy dependent on language that arises from ambiguity in the grammatical structure of a sentence.1 However, as noted in Chapter 1, Aristotle’s examples do not translate very well into English as common errors or sophistical deceptions that contemporary students would recognize as significant fallacies. One example Aristotle gave is: ‘A man a pillar sees, therefore the pillar sees.’ (166 a 10). Another is: ‘Surely you insist on being what you insist on being. You insist on a stone being. Therefore, you insist on being a stone’. (166 a 12 – 166 a 14). The logic textbooks in Latin, and subsequently in English and other modern languages, have struggled to find useful and convincing examples of amphiboly, in order to retain the Aristotelian tradition of having amphiboly as a fallacy. But as we will see below, these attempts have failed, quite consistently, and generally the burden of proof seems to be more and more against amphiboly as a significant fallacy [Hamblin, 1970, p. 18].

Ambiguous Sentence Special Price Structural Ambiguity Informal Logic Regular Price
These keywords were added by machine and not by the authors. This process is experimental and the keywords may be updated as the learning algorithm improves.
This is a preview of subscription content, log in to check access.