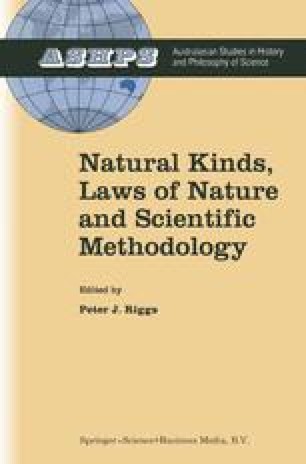 Chapter
Part of the Australasian Studies in History and Philosophy of Science book series (AUST, volume 12)

In his essay ‘Laws and States in Quantum Mechanics’, John Forge presents a case for considering laws of nature to be privileged sets of states, trajectories in the quantum mechanical analogue of phase space. Having presented an argument to show that states have to be taken with full ontological seriousness, Forge then uses those states to undergird his favourite account of laws and explanation — called the Instance View. On this view laws are a special sort of pattern, a certain kind of regularity, and explanations are instances of these regularities (so that you explain some phenomenon A by indicating that it is an instance of some regularity R). Forge then uses this account of laws and explanation to urge the acceptance of van Fraassen’s Modal Interpretation of Quantum Mechanics.

Measurement Problem Schrodinger Equation Mere Possibility Modal Interpretation Instance View
These keywords were added by machine and not by the authors. This process is experimental and the keywords may be updated as the learning algorithm improves.
This is a preview of subscription content, log in to check access.