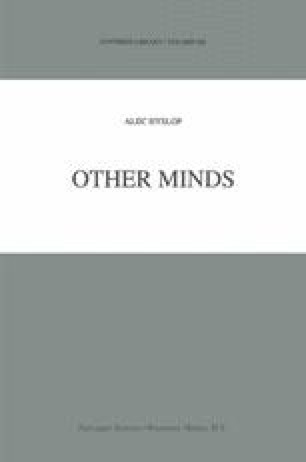 Essential Element Recent Time Actual Situation Good Argument Criterialist View
These keywords were added by machine and not by the authors. This process is experimental and the keywords may be updated as the learning algorithm improves.

“To return to Françoise ... if then in my anger at the thought of being pitied by her I tried to pretend that on the contrary I had scored a distinct success, my lies broke feebly on the wall of her respectful but obvious unbelief. ... For she knew the truth.” — Proust.

“... it was she who first gave me the idea that a person does not (as I had imagined) stand motionless and clear before our eyes with his merits, his defects, his plans, his intentions with regard to ourself exposed on his surface, like a garden at which, with all its borders spread out before us, we gaze through a railing, but is a shadow, which we can never succeed in penetrating, of which there can be no such thing as direct knowledge, with respect to which we form countless beliefs, based upon his words and sometimes upon his actions, though neither word nor actions can give us anything but inadequate and as it proves contradictory information — a shadow behind which we can alternately imagine, with equal justification, that there burns the flame of hatred and of love.” — Proust.1