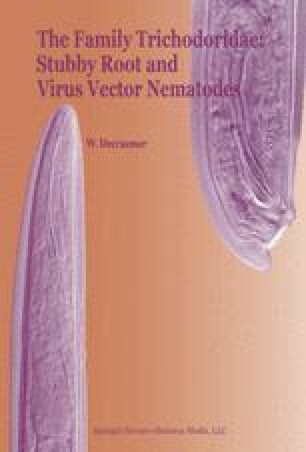 Since T. christiei (now P. minor), the first trichodorid recognized as damaging plants, many species of Trichodoridae have been recorded as plant pathogens, but some species are considered more economically important than others. P. minor for example, appears to be fairly cosmopolitan and a pest of many crops. It is considered to be the most economically important species of stubby root nematodes in the USA. Typical above-ground symptoms of infected plants are retarded growth, chlorotic and wilted foliage, and sensitivity to drought (McGowan, 1983; Christie, 1959; Heyns, 1975). The amount of damage to the root system varied with the crop attacked, and further appeared greatly influenced by season, soil type and fertility (Jones et al., 1969; Cooke, 1973). Often, the crop can compensate for initial damage and yield almost normally, but this was not the case in tests with wheat and barley (Spaull, 1980).

Sugar Beet Nematode Population Vector Nematode Soilborne Pest Stubby Root Nematode
These keywords were added by machine and not by the authors. This process is experimental and the keywords may be updated as the learning algorithm improves.
This is a preview of subscription content, log in to check access.