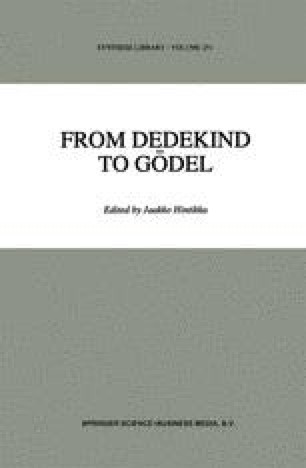 Husserl and Hilbert on Completeness

In a 1900 paper entitled “On the Number Concept”, the formalist mathematician David Hilbert proposed a set of axioms from which he hoped arithmetic might be derived. The last of these axioms was an “Axiom of Completeness” stipulating that: “It is not possible to adjoin to the system of numbers any collection of things so that in the combined collection the preceding axioms are satisfied; that is, briefly put, the numbers form a system of objects which cannot be enlarged with the preceding axioms continuing to hold.”1

Formal Logic Logical Investigation Deductive System Axiom System Transcendental Phenomenology
These keywords were added by machine and not by the authors. This process is experimental and the keywords may be updated as the learning algorithm improves.

First of all I must thank Mr Dagfinn Føllesdal for his thorough reading of my text and his insightful suggestions as to how to improve it.