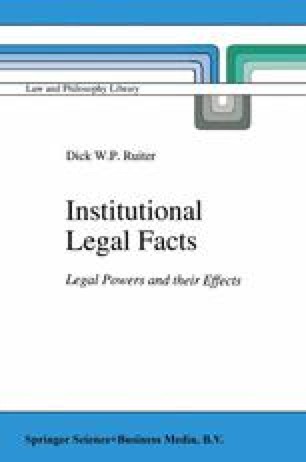 The Concept of Legal Systems

Among the first legal scientists to notice the similarity between legal provisions and performative utterances was the Scandinavian legal realist, Karl Olivecrona in the second, completely rewritten version of his book Law as a Fact.1 The notion of ‘performative utterances’ or ‘performatives’ stems from J.L. Austin, the founding father of the theory of speech acts.2 Austin pointed out that many human utterances seem, on first glance, to describe reality, while on closer inspection this simply cannot be the case. Turning to the classic example frequently used by Austin himself:

“‘I name this ship the Queen Elizabeth” — as uttered when smashing the bottle against the stem.’3

Legal System Basic Norm Legal Norm Tree Part Constitutive Rule
These keywords were added by machine and not by the authors. This process is experimental and the keywords may be updated as the learning algorithm improves.
This is a preview of subscription content, log in to check access.