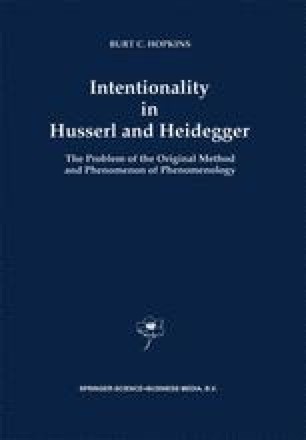 Intentionality in Husserl and Heidegger pp 189-214 | Cite as

Intentionality: An Original or Derived Phenomenon?

Drawing again on the exegetical discussions of Parts One and Two of my study, I find that when the results of Husserl’s and Heidegger’s accounts of the phenomenon of intentionality are considered, the common theme of these respective accounts emerges under the heading of “Wesensstruktur” (essential structure). For both of these thinkers, the phenomenon of intentionality emerges in terms of its essential structuring of that which is uncovered or disclosed, within the context of phenomenology’s methodological return, as an already given phenomenal field. However, the precise nature of the ‘matters themselves’ of the already given phenomenal field or realm that, upon being returned to, yields, in accord with its phenomenological treatment, intentionality as its (in the instance of Husserl) or an (in the instance of Heidegger) essential structure, is controversial for these two thinkers. Which is to say, that not only is the precise character of the ‘matter itself’ of the essence manifested by the phenomenon of intentionality at issue (and in controversy) for Husserl and Heidegger, but also at issue, is the precise status of the ‘matters themselves’ of the phenomenologically relevant (since it is encountered as having been already given) exemplary field which comprises the original ground, from out of which the essence of intentionality is unfolded.

Phenomenal Status Essential Structure Time Consciousness Phenomenological Reflection Thematic Object
These keywords were added by machine and not by the authors. This process is experimental and the keywords may be updated as the learning algorithm improves.
This is a preview of subscription content, log in to check access.