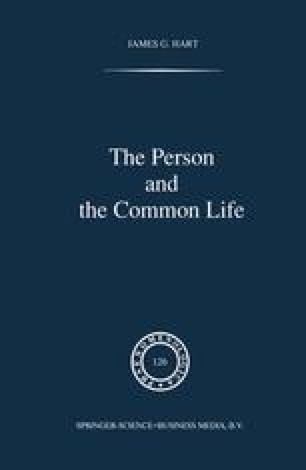 The Absolute Ought and The Godly Person of a Higher Order

We have seen that personal being is an identity affixed to the I as the source-pole of acts, an identity which these acts constitute. The formulation of the task of being a person approaches an analytic proposition: The human is capable of a substantial personal identity across the flux of changing experiences, i.e., is capable of true self-preservation, when he or she is capable of preserving the true self substantially, i.e., through position-takings which are irrevocable and unregrettable. Our discussions of the common life, the original primal encompassing “we,” and the analogy of love have urged that the true self to be preserved is a social self. In this chapter we wish to establish more firmly this claim. We shall see that what Husserl calls “the absolute ought” is, first of all, the general framework within which true self-identity gets sorted out as a matter of prudence, telos,and duty in conjunction with the interpersonal-social sense of the true self. Universal ethical love becomes the name of the intentionality of this overriding “must” (Soll); the divine personality of a higher order is the ultimate name of the true self-preservation which alone can fulfill the immanent ideal of the ethical reduction which gives rise to the inquiry into this overriding ought. We best start by returning to some aspects of the ethical reduction.

Categorical Imperative Ethical Reflection Moral Point Impartial Spectator Transcendental Subjectivity
These keywords were added by machine and not by the authors. This process is experimental and the keywords may be updated as the learning algorithm improves.

But the I is only in a We and that We necessarily becomes relativized unto infinity and unto a communal We whose scope of We-formation extends to an emergent communalization of an all-personal We, which genuine We ought to be.