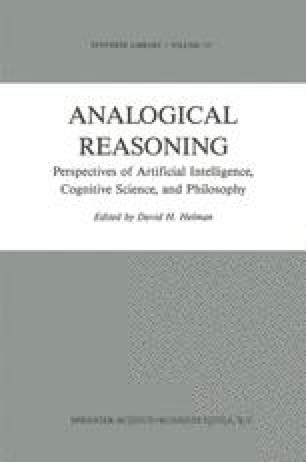 The related problems of metaphor and analogical reasoning have recently become of interest within three separate disciplines: philosophy of science, philosophy of language, and Artificial Intelligence. Classically the study of analogy has been concerned with analogical meaning (related to metaphor), and with analogical argument, which was seen in standard logic texts up to the 19th century as a very poor relation of inductive and hypothetical reasoning.1 These two aspects began to come together in the 19th century with explicit discussion of both meaning and argument from the point of view of scientific models.2 Subsequently positivist philosophy of science added “analogy” to its consideration of inductive argument as an important ingredient of induction, and post-positivist philosophy began to consider analogical meaning in models as crucial for the understanding of theoretical concepts and the problem of meaning variance between theories.3

Concept Formation Linguistic Term Analogical Reasoning Successful Prediction Family Resemblance
These keywords were added by machine and not by the authors. This process is experimental and the keywords may be updated as the learning algorithm improves.
This is a preview of subscription content, log in to check access.