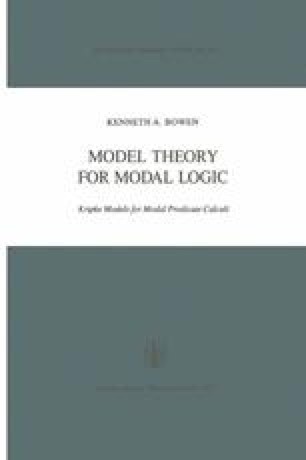 If 𝕬 is a modal structure for the language ML and if ML’ is a sublanguage of ML, we define the restriction of 𝕬 to ML’. 𝕬↑ ML’, as follows. Let 𝕬 = <A k, K, L, O, N> and let L’ be the underlying classical language of ML’. Then 𝕬↑, where A↑k|L’ is the restriction of the classical structure A k to L’ (cf. Shoenfield (1967), p. 43). We also say that A is an expansion of A| ML’ to ML. Let S be a modal system and let T and T’ be S-theories with languages ML(T) and ML(T’), respectively. We define the union of T and T’, T ∪ T’, to be the S-theory with language L’’ whose nonlogical symbols consist of precisely those of ML(T) together with those of ML(T’) (at this point, if we have not already, we agree to the convention of Shoenfield (1967), p. 15, that if a given symbol is used in one manner in a certain language, it is used in all other languages in the identical manner), and whose nonlogical axioms are precisely those of T together with those of T’. The following proof of the Joint Consistency Theorem is a rather direct adaptation of the classical proof as given in Shoenfield (1967). An approach using somewhat different techniques is contained in Gabbey (1972a).

Modal System Classical Structure Predicate Symbol Closed Formula Classical Language
These keywords were added by machine and not by the authors. This process is experimental and the keywords may be updated as the learning algorithm improves.
This is a preview of subscription content, log in to check access.