The Logic of Conditionals 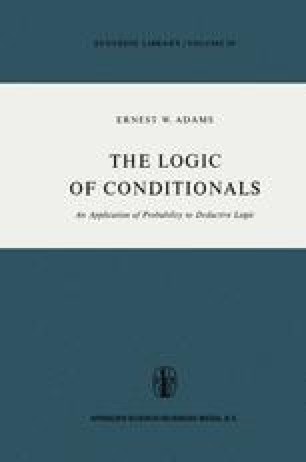 This chapter will be primarily concerned with the question: it is possible for the premises of an inference schema to be highly probable at the same time that its conclusion is improbable, and more generally, how low a conclusion probability is compatible with given high premise probabilities for inferences of that pattern? This is the problem of determining universal probabilistic soundness, but as noted in Section I.8 it proves most convenient to approach this problem via a consideration of probabilistic consistency. In what follows we will give mathematical precizations of the concepts of universal probabilistic soundness and probabilistic consistency which have so far been used in a rough informal way, and then derive some general results concerning them. As we will be mainly concerned with mathematical theory in what follows, basic methodological issues will be left aside for the present. A few preliminary foundational remarks are in order, however.

Factual Formula Factual Proposition Factual Language Probabilistic Consistency Material Counterpart
These keywords were added by machine and not by the authors. This process is experimental and the keywords may be updated as the learning algorithm improves.
This is a preview of subscription content, log in to check access.

Cite this chapter as:
Adams E.W. (1975) Mathematical Theory of Probabilistic Consistency and Universal Probabilistic Soundness. In: The Logic of Conditionals. Synthese Library (Monographs on Epistemology Logic, Methodology, Philosophy of Science, Sociology of Science and of Knowledge. And on the Mathematical Methods of Social and Behavioral Sciences), vol 86. Springer, Dordrecht. https://doi.org/10.1007/978-94-015-7622-2_2