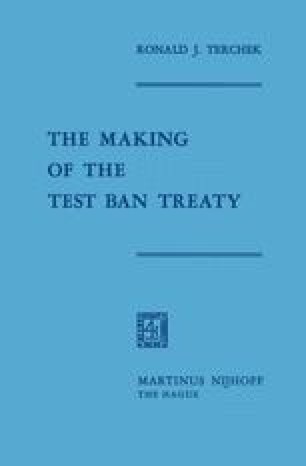 The Senate considered arms control and disarmament on several occasions during the Kennedy administration. In 1961, it passed the bill to establish the Arms Control and Disarmament Agency by an impressive vote of 73 to 14. However, many members had been skeptical about the possibility or desirability of achieving arms control. For example, 33 members voted for a motion by Senator Everett M. Dirksen to refer the bill creating ACDA to the Committee on Armed Services, a move designed to weaken and probably kill the Agency. Doubts about disarmament were more forcibly expressed at that time when an amendment offered by Senator Barry Goldwater to limit the authority of the Agency was narrowly defeated by a vote of 43 to 46.1 Authorization bills for ACDA always drew substantially more opposition than money bills for the Department of Defense.

Atomic Energy Commission Foreign Relation Preliminary Consideration Senate Committee Congressional Record
These keywords were added by machine and not by the authors. This process is experimental and the keywords may be updated as the learning algorithm improves.
This is a preview of subscription content, log in to check access.