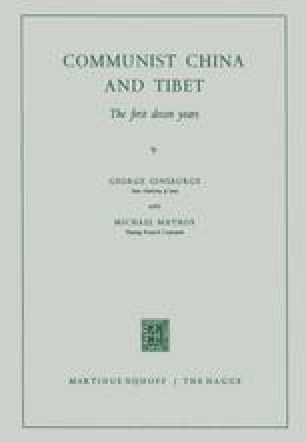 Such, then, was the Tibetan governmental structure which confronted the Communist authorities in 1951 and which they promised to respect within the constitutional context of the Chinese People’s Republic. On the surface, the pledge was to a large extent observed, at least until the uprising of 1959, and the formal institutions of native Tibetan administration were altered but little. Nevertheless, while outright refashioning of the local State mechanism remained minimal during this first phase of Sino-Tibetan relations, the Chinese almost at once began introducing sundry indirect changes into the fabric of the area’s political organization. Hence, the course followed by Peking in its circuitous approach to the touchy question of implementing reforms in Tibet well deserves attention, for, in the long run, it is thus that the Chinese prepared the ground-work and made possible the concerted action subsequently initiated by them with a view toward transforming altogether the physiognomy of the Tibetan society.

Chinese Authority Tibetan Population Administrative Committee Chinese Position Chinese Record
These keywords were added by machine and not by the authors. This process is experimental and the keywords may be updated as the learning algorithm improves.
This is a preview of subscription content, log in to check access.