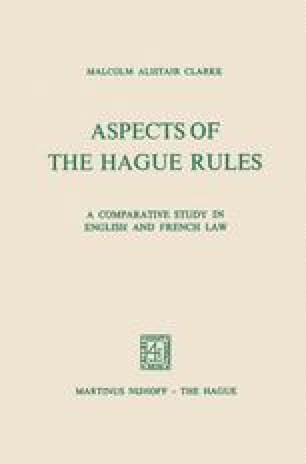 History of the Brussels Convention

In the 19th century, freedom to contract for the shipment of goods had become freedom for powerful carriers to impose the bondage of unfair terms on those shippers, the majority, in a position of commercial inferiority.3 This was true of all trading states.4 In France, the courts were deaf to pleas that carriers by sea should share the liability of other carriers for their servants under art. 1384 c. civ.: sea carriers could not supervise the acts of their maritime servants, and the range of persons from whom these servants could be chosen was restricted by law.5 However, the real guarantee of the carriers’ position lay in two related factors. Firstly, their commercial interests reflected those of dominant elements in national and political life. Secondly, commercial piracy could still be conducted under the flag of free trade which was respected by prevalent liberalism. Thus, it was in a nation of shippers that the first reforms were passed, the United States.6 Thus, when in1913 de Monzie proposed similar reforms in France, reforms which satisfied the ostensible objections of the carriers, they were not even discussed.7 This was one of many attempts to institute legislative reform.8

Dominant Element BRUSSELS Convention Unfair Term Voluntary Adoption Powerful Carrier
These keywords were added by machine and not by the authors. This process is experimental and the keywords may be updated as the learning algorithm improves.