The Sociology of Return Migration: A Bibliographic Essay 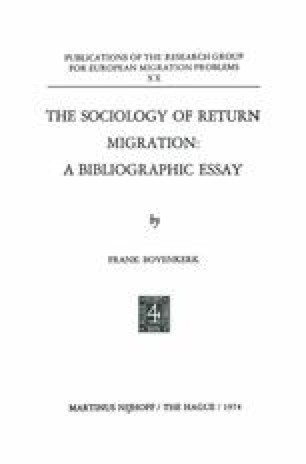 The Sociology of Return Migration: A Bibliographic Essay pp 20-25 | Cite as

Success or Failure: The Motives for Return Migration

A topic that is characteristic for the study of return migration is the question of the motives for returning, and more specifically to find out whether returnees are those who made a success out of their emigration or the failures, persons who could not make it and had to return with nothing to show for their pains. Before going into these matters one type of return migration has to be set apart for which the question of success or failure is totally irrelevant: the repatriation of displaced persons after a war or the forced repatriation of refugees. Kulisher (1948) gives an impressive historical survey of all the population movements and repatriations in Europe, resulting from two world wars. Storbeck (1963) discussed the repatriation of evacuees of war as one component in the migration from East Germany to the Federal Republic before the construction of the Berlin wall in 1961. In Taft & Robbins (1955) and Murphy (1955) one can find data on the enormous problems involved in the repatriation of refugees. Fermi (1968) gives examples of “illustrious” émigrés, statesmen, political leaders, writers and other intellectuals who returned from the U.S.A. to their European home countries after world war II.

Migrant Worker Return Migration Displace Person Successful Migrant Temporary Emigration
These keywords were added by machine and not by the authors. This process is experimental and the keywords may be updated as the learning algorithm improves.
This is a preview of subscription content, log in to check access.

Cite this chapter as:
Bovenkerk F. (1974) Success or Failure: The Motives for Return Migration. In: The Sociology of Return Migration: A Bibliographic Essay. Publications of the Research Group for European Migration Problems, vol 20. Springer, Dordrecht. https://doi.org/10.1007/978-94-011-8009-2_5