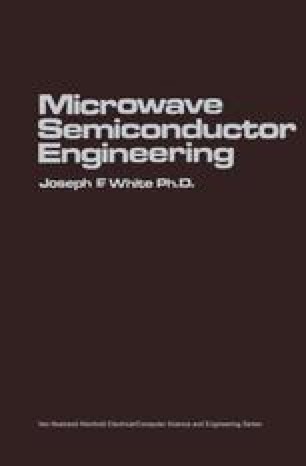 The subject of transistor drivers for diode control devices is extensive enough to demand a separate volume. We do not attempt to make this chapter a complete working notebook for the driver designer, but rather a guide for the microwave circuit engineer who may be in the position of having either to fabricate an elemental driver to prove out a given device or to work with a driver circuit engineer to develop a circuit no more complex than necessary to satisfy the design objectives. As such, the sample drivers described show operating fundamentals and do not necessarily represent final production designs. This chapter treats only two-state, or binary, driver circuits in which either a forward bias current or a reverse bias voltage is to be applied to a PIN diode. Not covered are analog drivers as used in such circuits as linear attenuators and continuous phase shifters, where a precise bias current or voltage profile might be required. The binary circuits to be discussed are useful for discrete control devices including switches, phase shifters, and high power duplexers, and, as such, cover most of the driver requirements for PIN diode devices.

Reverse Bias Forward Bias Logic Signal Switching Speed Reverse Bias Voltage
These keywords were added by machine and not by the authors. This process is experimental and the keywords may be updated as the learning algorithm improves.
This is a preview of subscription content, log in to check access.