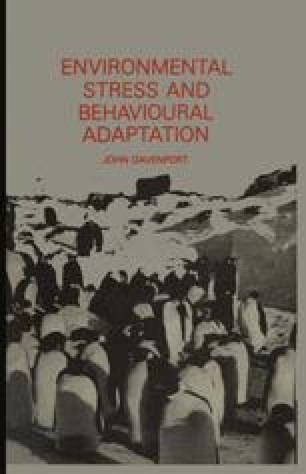 Life on earth began in the sea, where representatives of all animal phyla still live. Sea water is a salty solution which is remarkably stable in its chemical makeup in areas away from the coasts or freshwater influences. The degree of saltiness, or salinity, is normally expressed in terms of parts per thousand (‰) and varies between 32 and 38‰ in near surface waters of the oceans. Values outside this range are found only in enclosed seas such as the Baltic, which has a heavy freshwater inflow and ranges regionally between 1.5 and 30‰, or the Red Sea, which has little freshwater input but experiences intense solar-driven evaporation and so has a salinity of more than 40‰. Sea water from the abyssal depths is even more stable in salinity, being between 34.5 and 35‰ from the poles to the equator. The proportions of the various salts which make up these salinities are still more fixed; until the advent of conductivity meters during the 1960s it was common practice to measure total sea water salt concentrations with great precision simply by measuring the chloride content, so constant are the ionic ratios of sea water. It is believed that all naturally occurring elements of the Periodic Table are present in sea water, but most only at vanishingly low concentrations; the nine ions shown in Table 2.1 make up roughly 99.5 per cent of the total salt content of sea water. This then is the equable environment in which all invertebrate phyla arose, with body fluids basically very similar in concentration to the external medium.

External Medium Mantle Cavity Mantle Fluid Shell Valve Sessile Species
These keywords were added by machine and not by the authors. This process is experimental and the keywords may be updated as the learning algorithm improves.
This is a preview of subscription content, log in to check access.