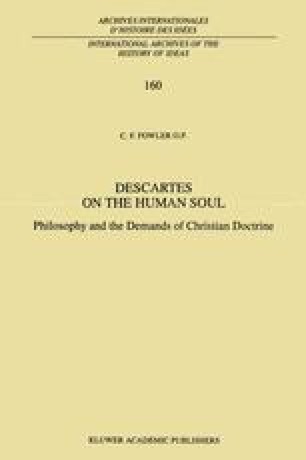 From Soul to Mind — Descartes’ Vocabulary

A notable aspect of the Latin text of the Meditationes, in contrast to its accompanying texts — Dedicatory Letter, Praefatio, Synopsis — is the use of vocabulary. Descartes was very deliberate and disciplined in his choice and use of the wide range of Latin words available for naming the non-corporeal aspect of the human being — mens, ingenium, anima, animus, spiritus.1 This characteristic of the Meditationes stands in marked contrast to the “confusions and uncertainties” surrounding the use of soul-vocabulary among Descartes’ contemporaries.2 However, this is an observation which seems to have been somewhat overlooked by commentators. Geneviève Rodis-Lewis, in her edition of the Descartes-Regius correspondence, while acknowledging Descartes’ distinct preference for mens in the Meditationes, remarks that he employed “tantôt anima (titre etc.), tantôt mens (titre de la 2e Méditation, etc.), tantôt animus (AT VII, 27)”, giving the impression that the philosopher had engaged in a less than strictly disciplined use of vocabulary.3 In a recent article, Cottingham comments, in regard to Descartes’ use of mind and soul, that “he made no distinction between the two terms”.4 While this is true of the 1647 French translation, such a comment could be misleading without reference to the Meditationes’ radical distinction between the Latin terms, mens and anima.

Human Soul Real Distinction Latin Translation Latin Text Rational Soul
These keywords were added by machine and not by the authors. This process is experimental and the keywords may be updated as the learning algorithm improves.
This is a preview of subscription content, log in to check access.