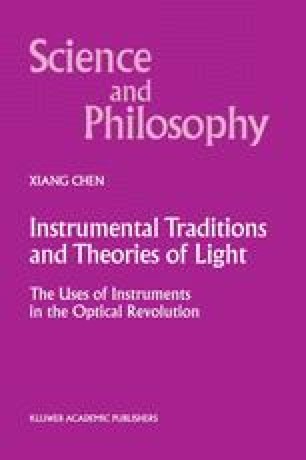 Instrumental Traditions and Theories of Light pp 47-67 | Cite as

The Dispute over Dispersion

Although by the early 1830s the wave theory of light had demonstrated its superior explanatory power in accounting for many optical phenomena, it was not without obstacle. The phenomenon of dispersion (light of different colors suffering different degrees of refraction in a prism) was still problematic for the wave theory. According to the doctrines outlined by Augustin Fresnel, the velocity of light as well as its refractive index depended solely upon the elasticity of the medium transmitting it. Light of every color should travel with the same velocity and have only one refractive index in a homogeneous medium. But experiment showed that light beams traveled with different velocities and had difference refractive indices within a prism according to their colors. However, such negative evidence from dispersion experiments did not become an obstacle to the acceptance of the wave theory. Why did dispersion experiments not play any decisive role in the evaluation of the wave theory of light? Those who continued to embrace the wave theory perhaps did so because they gave more weight to the other explanatory successes of the wave theory, or because they did not believe that the rival particle theory could explain the phenomenon.1 But it is difficult to understand the reaction of the opponents of the wave theory. They should have seized this opportunity to expose the explanatory inadequacy of the rival, as they had done in many other cases. Why did they not take advantage of the issue of dispersion?

Refractive Index Spectral Line Wave Theory Diffraction Spectrum Angular Size
These keywords were added by machine and not by the authors. This process is experimental and the keywords may be updated as the learning algorithm improves.
This is a preview of subscription content, log in to check access.