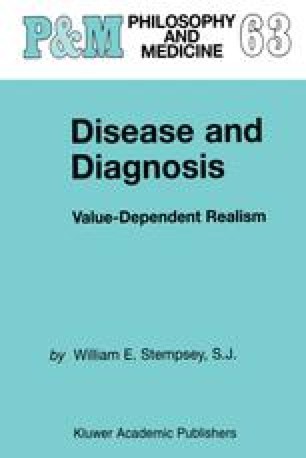 We began with an examination of the challenge of social constructivism to scientific realism. Scientific realism is often seen as the fundamental basis for objectivity and rationality in medical practice. Few physicians would argue that science is the only foundation of Western medicine; most would recognize that medical practice is a value-laden enterprise. However, most physicians tend to separate the factual basis of medicine from the value judgments involved. I have argued that scientific realism is an inadequate philosophical basis for understanding even what seems to be a purely scientific aspect of medicine, the practice of diagnosis. Instead, I have proposed a new form of realism, value-dependent realism, which attempts to mediate between social constructivism and scientific realism.

Infant Death Social Constructivism Diagnostic Process Conceptual System Scientific Realism
These keywords were added by machine and not by the authors. This process is experimental and the keywords may be updated as the learning algorithm improves.
This is a preview of subscription content, log in to check access.