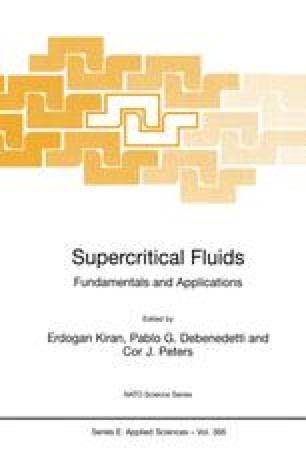 Supercritical fluid (SCF) solvents are unique in that their densities can be varied continuously from gas-like to liquid-like values simply by varying the thermodynamic conditions. Because many of a fluid’s solvating properties are strongly dependent on the fluid density, such large changes in density can have dramatic effects on solute reactivity [1,2]. For example, at low pressures supercritical water supports homolytic, free radical reactions, whereas at higher pressures, heterolytic, ionic reactions dominate [3,4]. Thus, thermodynamic control of SCF solvent densities promises to enable us to control reaction outcome and selectively produce desired products.

Bulk Density Local Density Supercritical Fluid Supercritical Water Vibrational Relaxation
These keywords were added by machine and not by the authors. This process is experimental and the keywords may be updated as the learning algorithm improves.
This is a preview of subscription content, log in to check access.