Microprocessors in Robotic and Manufacturing Systems 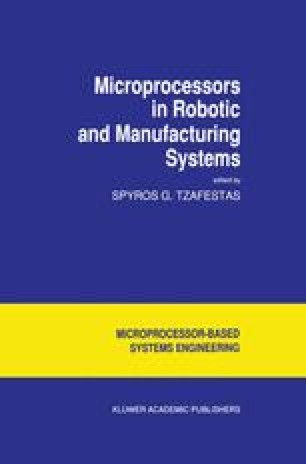 Microprocessors in Robotic and Manufacturing Systems pp 335-351 | Cite as

This chapter describes how factory floor devices can be supported, using microcomputer based Local Area Networks. We start by introducing the problems faced in computer integrated manufacturing (CIM) environment in general and why there is a need to support production devices such as robots and Programmable Logic Controllers (PLC). After stating the minimum functions required from any support system, we describe one such a system implemented in General Motors Car Assembly plant in Oshawa, Canada. Most of the design and development of this system had to be done in-house, with the assistance of McMaster University engineers, since this was the first time technologies such as fibre optic media and Manufacturing Automation Protocol (MAP) were used in full scale production environment. The design philosophy and some technical aspects of this implementation are also included here. There are several areas which need further work; we will discuss present efforts and future directions.

Programmable Logic Controller Computer Integrate Manufacturing Robot Program Home Directory Specific Robot
These keywords were added by machine and not by the authors. This process is experimental and the keywords may be updated as the learning algorithm improves.
This is a preview of subscription content, log in to check access.