Stochastic Processes on a Lattice and Gibbs Measures 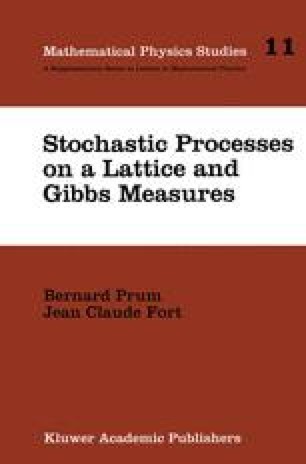 Aspects of the Ising Model

In 1920, the German physicist, Ernst Lenz, described a model designed to explain ferromagnetism. The iron atoms are situated at the vertices of a periodic lattice, and each atom behaves like a small magnet which may be oriented in a direction denoted by +1, or in the opposite direction denoted by -1. Physically, two magnets that are close to one another require less energy to be oriented in the same sense than in an opposite sense. Up to a first approximation, Lenz assumed that each atom is only sensitive to the position of the nearest atoms; up to an additive constant, the energy of a pair of atoms situated at neighboring vertices i and j could thus be written, H = - J if the two atoms have the same orientation H = + J if the two atoms have opposite orientations where J is a positive constant