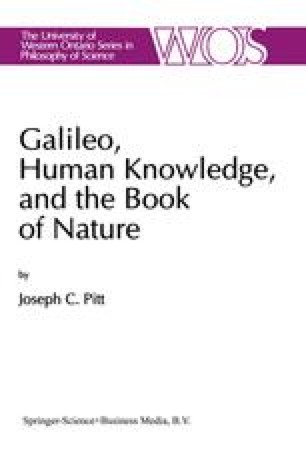 Galileo, Human Knowledge, and the Book of Nature pp 53-77 | Cite as

The Limits of Knowledge; Mathematics and Methodological Principles

The limits of knowledge are determined by the world, by the apparatus the investigator brings to bear on problems, and the cognitive values and methods that govern the objectives of the process of inquiry. There is little we can say about the world per se Kant was right to emphasize. The position I start from here is that what is of epistemological interest is not the way the world is, but (a) the character of the inquiry as determined by the goals, values and methods of the inquirers,32 and (b) the way the world is believed to be.

Human Knowledge Scientific Realist Methodological Principle Deductive Proof Abstracted Principle
These keywords were added by machine and not by the authors. This process is experimental and the keywords may be updated as the learning algorithm improves.
This is a preview of subscription content, log in to check access.

Cite this chapter as:
Pitt J.C. (1992) The Limits of Knowledge; Mathematics and Methodological Principles. In: Galileo, Human Knowledge, and the Book of Nature. The University of Western Ontario Series in Philosophy of Science (A Series of Books in Philosophy of Science, Methodology, Epistemology, Logic, History of Science, and Related Fields), vol 50. Springer, Dordrecht. https://doi.org/10.1007/978-94-011-2620-5_3