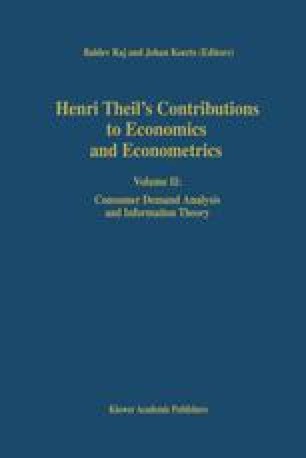 Substitution, Complementarity, and the Residual Variation Around Engel Curves

It is well-known that the empirical determination of substitution and complementarity relationships among pairs of consumption goods is hampered by serious difficulties. The time series analysis which is necessary for the estimation of the underlying price and income elasticities is characterised by the problems of small samples, multicollinearity among the explanatory variables, etc., so that rather large standard errors of the resulting estimates is a normal result. It is understandable, therefore, that alternative procedures have been devised in order to determine substitution and complementarity relations. The present paper is concerned with one of these procedures, which is based on budget data. The number of observations in budget enquiries is usually very much larger than in the case of time series analysis, but there is of course the disadvantage that no adequate price variation among the observational units exists.1 The procedure followed implies then that, for any pair of commodities for which one wants to establish a substitution or complementarity relationship, the two Engel curves are derived, after which the two sets of residuals around these curves are correlated with each other. A positive residual correlation is then regarded as a prima facie indication of complementarity, a negative correlation as an indication of a substitution relationship. Allen and Bowley (1935) (to whom, as far as the present authors are aware, this method is due) computed thirty-eight residual correlations for pairs of expenditure groups and arrived at figures ranging from −0.94 (for butter and margarine) to 0.73 (for fresh fruit and vegetables), most of them being negative.

Utility Function Income Elasticity Residual Correlation Substitution Matrix Budget Enquiry
These keywords were added by machine and not by the authors. This process is experimental and the keywords may be updated as the learning algorithm improves.

This article first appeared in The Review of Economic Studies, 25 (1957–1958), 114–123. Reprinted with the permission of Elsevier Science Publishers B.V. (North-Holland).