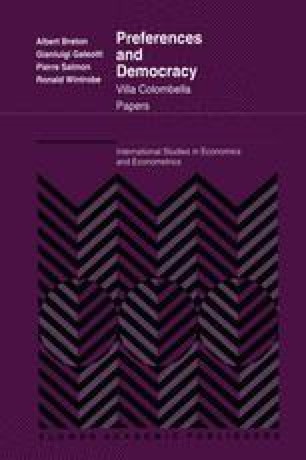 Issues and Party Alignments: A Review with Canadian Examples

This paper reviews some theory on the role of issues in the maintenance and disruption of party alignments and applies the theory to two realignments, 1896-1900 and 1957-63, of the Canadian system. It argues that the multidimensionality which is typical of electoral choice helps explain the tendency of parties to abandon the median. This in turn helps explain why social differences in party preference exist and it also sheds light on how alignments can change rapidly. It less helpful in accounting for the indefinite persistence of such group differences. An implication is that an alignment’s persistence requires implicit agreement, including between parties, to restrict the agenda.

TIlis paper takes on two complementary tasks. It begins with a review of theory on the role of issues in the maintenance and disruption of party alignments. It ends with an account of two realignments in the Canadian system.

The history and the theory inform each other: the Canadian examples illustrate points in the theoretical review, but the theory allows the paper to propose novel interpretations of those same events.

The literature inspired by Downs (1957) on issues in elections seems hard to square with the very idea of party alignment. The dominant result emphasizes the pivotal role of the median voter and yields a competition between parties which should evoke little or no social differentiation in electoral response, except to the extent that actors apart from the mass electorate, activists, constrain their respective parties. The dominance of the median in these models seems to rest on the assumption that the issue arena has only one dimension.

The reality of mass elections includes parties, even Canadian ones, whose bases are differentiated. The social differences in questioncommonly persist for many decades. But the history of party systems is also punctuated by realignments, changes in the base of the system, some of the most profound of which have occurred very quickly. Large and rapid change can be accommodated to issue voting models by expanding the number of issue dimensions in play, an insight we owe to Riker (1982). But expanding the dimensionality of the game makes the task of explaining the endurance of alignments harder. Again, we are forced to consider factors outside the mass electorate.

Working through the theory will help us identify the ways in which an alignment can be disrupted. The Canadian examples will illustrate two of these mechanisms in action.

Ideal Point Median Voter Party System Condorcet Winner American Political Science Review
These keywords were added by machine and not by the authors. This process is experimental and the keywords may be updated as the learning algorithm improves.
This is a preview of subscription content, log in to check access.