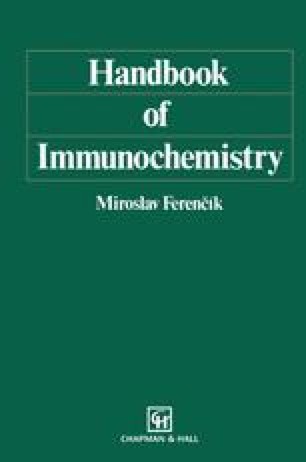 Handbook of Immunochemistry pp 1-3 | Cite as

The term immunochemistry was coined by the Swedish chemist Arrhenius who used it for the first time in his lectures in 1907. Arrhenius characterized immunochemistry as a science dealing with “chemical reactions of substances that occur in the blood of animals after injection of foreign substances, i.e. after immunization. The products of immunization react with these foreign substances similarly as proteins or enzymes according to their chemical properties. ” This, 85-year-old definition, can be expressed using contemporary terminology as follows: “Immunochemistry studies not only the chemistry of antigens and antibodies and the mechanism of their interaction, but also many other molecules participating in immune reactions. ” Thus, the original definition of Arrhenius embodies the main aspects of contemporary modern immunochemistry.

Foreign Substance Immunochemical Method Mutual Reaction Immunoenzyme Method Embryonic Inducer
These keywords were added by machine and not by the authors. This process is experimental and the keywords may be updated as the learning algorithm improves.
This is a preview of subscription content, log in to check access.