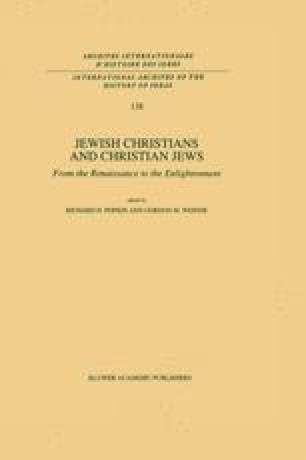 Hopefully it is no longer the case that historical presentations of the main intellectual and religious developments from the Renaissance and the Reformation up to the Enlightenment treat Jews and their relations to Christians as just a minor side issue unrelated to the central concerns of the overall societies of the time. The view that was expressed by Erasmus around 1500 that Judaism ossified after the beginning of Christianity and has had no developmental history thereafter has, hopefully, been discarded or abandoned by serious scholars. Researches into the history of the Cabbalistic writings and their impact on European thought, into the revival of Hebrew studies during the Renaissance, into the immediate importance of the conversion of the Jews and of the location of the Lost Tribes of Israel in Millenarian thought and activities, into the effects of the Spanish and Portuguese expulsions of the Jews on Europe and the Colonial Empires, into the emergence of the so-called “Jewish question” in secular nationalist societies, and into the status of Jews in modern tolerant societies, all indicate how intertwined Jewish, Christian and secular histories have been during the last five centuries.

Jewish Community Jewish Question Jewish Learning Colonial Empire Jewish Intellectual
These keywords were added by machine and not by the authors. This process is experimental and the keywords may be updated as the learning algorithm improves.
This is a preview of subscription content, log in to check access.