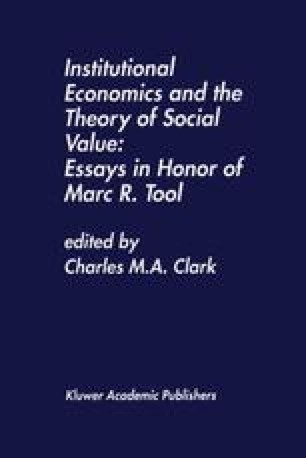 Institutional Economics and the Theory of Social Value: Essays in Honor of Marc R. Tool pp 179-194 | Cite as

Structural Change and the Compulsive Shift to Institutional Analysis

In his Presidential Address to the Association for Institutional Thought, Marc R. Tool (1981) reflected on economic science since World War I and described what he saw as evidence of a “compulsive shift” to institutional analysis. “The shift is compulsive,” he stated, “in the sense that the necessity of claiming pertinence to crucial problems of the day compels movement out of and beyond the mainstream conventional wisdom” (Tool 1981, p. 570). Three examples of this shift were discussed in Tool’s address: John Maynard Keynes’s work in response to capitalist instability; Arthur M. Okun’s stagflation research; and microeconomic work on human nature and motivation by Harvey Liebenstein and Herbert A. Simon.

Collective Bargaining Market Failure Market Imperfection Annual Average Rate Institutional Analysis
These keywords were added by machine and not by the authors. This process is experimental and the keywords may be updated as the learning algorithm improves.
This is a preview of subscription content, log in to check access.